This blog, Part 3, will showcase the opening of the Tower Hotel Courts, details about the rooms and amenities, a postcard that shows a room and even a help wanted ad.  I’ve thrown in a few additional details for fun.  Enjoy!

It’s good to make friends with archivists that work for the city of Dallas. They are a source of great information. An archivist sent me this Dallas Morning News article, dated October 6, 1946, on the grand opening of the Tower Hotel Courts. I’ve included an image of the article below and also typed it up for ease in reading.  I made some key words bold for future reference.  If you have access to NewsBank you can find it there as well.  You can gain access to NewsBank through your local library.

First completed units of the new Tower Hotel Courts, situated at the intersection of Harry Hines Boulevard and Highways 77, 183, 114 and Loop 12, were opened for business this week, giving Dallas one of the largest and most modern tourist hotel courts in the Southwest.

J. D. Blanton, manager, said plans call for opening ten additional units a week until all 108 units are ready to serve the public. He added that available units have all been booked for the Oct. 10-12 week end.

The establishment, ten minutes by automobile from downtown Dallas, has attached garage for each unit and will feature individual air conditioning, running ice water, three-station radio, germ killer lamp and vented gas heater in each apartment.

Of fireproof brick and plaster construction, the courts are fronted by a two-story structure surmounted by an eighty-foot tower. In this structure are located management offices and a guest lounge.

Custom-made furniture in each unit will be of birch, oak, mahogany and bleached walnut. Draperies, carpeting and other furnishings will complement the pastel tinted walls. Telephones will be installed in each unit when they become available.

The establishment has been constructed on a nine-acre site and work has already been started on additional facilities, including a restaurant, laundry and garage.”

I really like the detailed description of the rooms.  The “three-station radio” is impressive!  And I’m very intrigued by the “germ killer lamp”.

I also found the advertisement below from the Dallas Morning News, from November 17, 1946 for the Tower Hotel Courts.  With a description of “Texas’ Largest Ultramodern Hotel Courts”, this place sounds amazing. 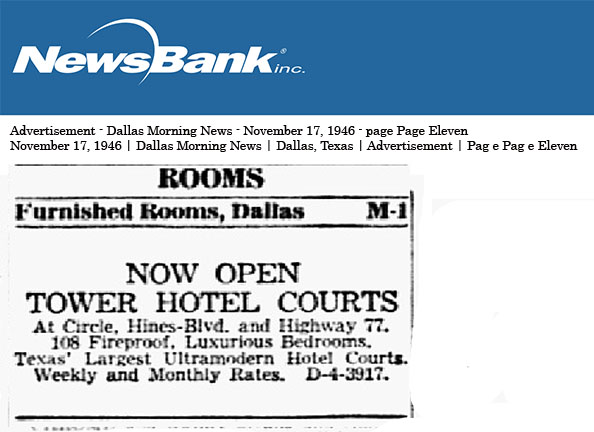 Below is a photo of a postcard from my collection.  Note the description, “108 Ultra Modern Bedrooms Completely Air Conditioned” and the image of the room.  The image also shows the “pastel tinted walls” referenced in the Dallas Morning News article.  I just wish I could see the germ killer lamp the article promised.  Unless, they are the two lamps on headboards?  Could they be UV? 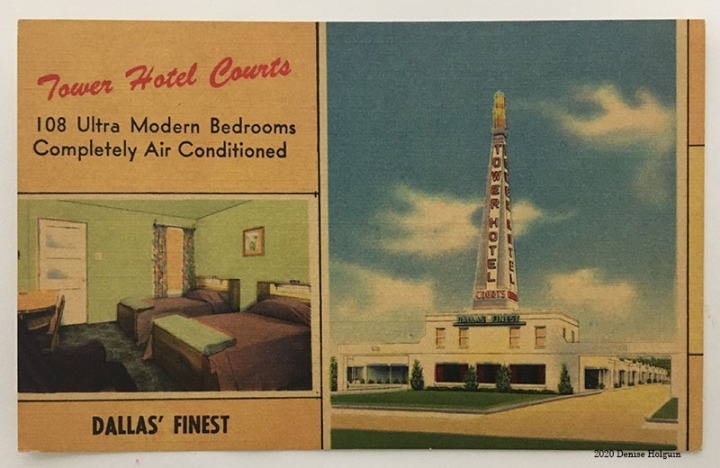 Sadly, there is no date on the back of the postcard to confirm it was from the time period before the hotel expanded.  But there is one clue that strongly suggests it is.  The description does not mention the pool, the coffee shop or the famous Bamboo Room nightclub that were part of the expansion.  So I suspect it is indeed before the renovations.

I do love getting lost in minutiae.  I researched “Stellmacher & Son, Dallas, Texas” that is listed on the back of the postcard.  It turns out it was a printing and advertising company that was started by Herbert Stellmacher in 1912.  To quote an obituary from the Dallas Morning News article from February 21, 1963, Mr. Stellmacher’s company “was one of the first Dallas advertising companies to feature advertising and printing specialties and was recognized as a developer in the upgrading of the printing industry.  In recent years the company has been devoted solely to advertising specialties.”

If you do a Google search, you’ll find many postcards with the Stellmacher & Son name.    Imagine the archives that company would have collected over the decades! 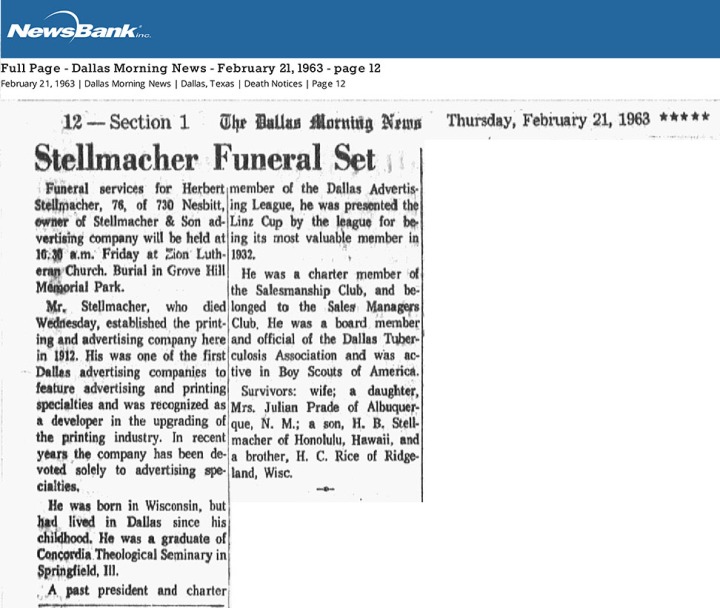 As an aside, you’ll also see a help wanted ad for my other favorite place, the Hotel Adolphus!

I’ll continue to post blogs as time permits.  I have quite a collection of ephemera to share.

2 thoughts on “The Tower Hotel Courts on Harry Hines, Part 3”