My friend and I were driving through a parking lot when I spotted a woman wearing a familiar striped garment.  I still have mine tucked away.

The evening of the car accident 3 years ago— there was a couple that stopped and helped me.  First the man approached. He was an off-duty police officer.  He asked if I was ok.  I was shaken. He had witnessed everything.  I gave him my ID and he handled calling 911.  He kept calling me Rachel— my first name.  He said I did a good job of getting the car under control.

His wife approached. She was very pleasant assuring me everything would be ok.  I was still shaking on the inside.  It was as if my bones were rattling.  I was crying. I was scared.  I didn’t know what happened. I looked at my windshield. It had shattered.  I was terrified but wanted to know the truth. Did I cause this?  The woman said no.

Her husband picked her up from the airport.  They ended up taking the tollway by mistake.  They were at the right place at the right time— apparently for me.  Before the accident they saw an SUV driving recklessly and they predicted it was going to cause an accident. And it did.

I couldn’t stop shaking.  I kept rubbing my leg— I guess as a coping mechanism.  I asked if I could hold her hand.  I needed human contact. She held my hand as I sat in my car.  I remember coming to my senses and asked her if she was safe standing on the tollway.  It did not seem like a good idea.  The tollway I later learned, was shut down.

The woman told me she was a school teacher. She asked me questions to keep me distracted in a good way.  But then I told her about my dog Kibbles who had just passed away exactly two weeks ago.  My mind kept going down in to rabbit holes.  She tried hard to get me out.

My nose and eyes were an endless faucet. I asked the woman if she had a tissue. She went to her car and returned.  She didn’t have a tissue but assured me I could use the garment from her suitcase.  I was hesitant but I needed to wipe my face.

Her husband returned and asked me to try moving my car to the right lane, which I did.

I got out of the car— still shaking inside. I held on to the garment to dry my eyes and nose.

The woman and I stood on the shoulder of the tollway.  Her husband reported the details to the trooper. I learned another witness aside from my guardian angels stopped to report the incident.  The only detail I could explain to the trooper was: I looked up in my rear-view mirror but it was too late. I had no understanding of what happened. I was scared this was somehow my fault.

My car was loaded on to the wrecker.   We caravanned off the tollway— the police, the wrecker for my vehicle, the wrecker for the SUV, a truck who had also been struck and the vehicle driven by my guardian angels.  We ended up at a parking lot for a bank.

My parents arrived. My guardian angels did the talking.  I didn’t have a lot of strength. I sat in a parking spot, holding on to my legs, still very rattled. Still very much at a loss for what happened.

It was time to go home.  The wrecker climbed in to my car to retrieve my camera bag (my most precious possession).  I left with my camera bag and the striped knit shirt from my guardian angel, which I still have today. 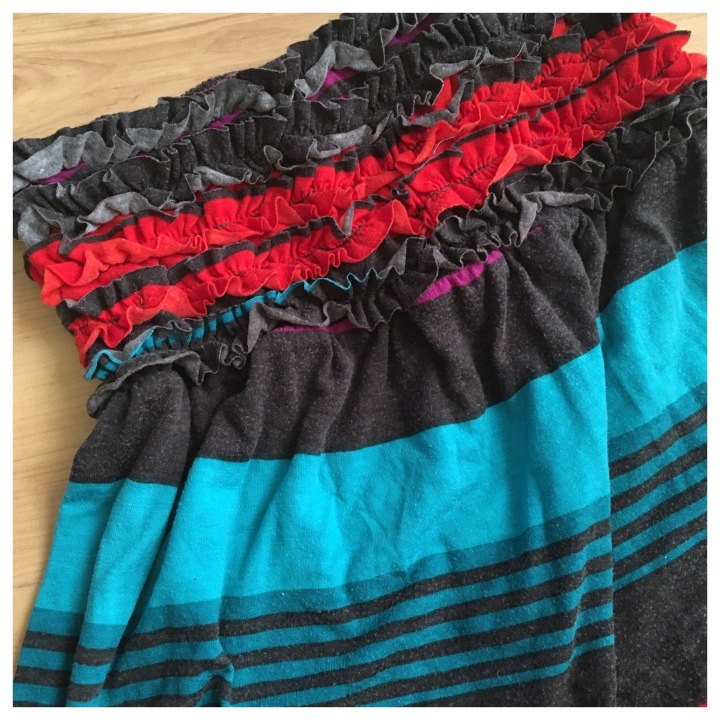