Notes:
Considering how long I’ve had Big Bertha’s Adventures, I think this is the first time I’ve featured Kibbles in a blog.  I wish it was under better circumstances.  5/15/15 will be remembered as a very sad day.

Three events helped plant a seed in my head:

Now I wanted a dog.  A chihuahua, like the one at grandma’s house.

Our chihuahua came from a humble background from a breeder in Garland.  Someone adopted her then changed their mind and returned her.  We had always raised her to believe she was not only wanted but royalty.  And in our hearts and minds, she was.

When dad first set eyes on her his words were something like “what in the world?” “Are you for real?”  At just a few months old she was a round, pudgy, scared little thing.

Her name was Kibbles Anthony Lisieux Holguin.  Kibbles, because that was the name of grandma’s dog.  Anthony, because I like St Anthony of Padua (I decided no matter the gender, my dog would be named after St Anthony.). Lisieux, because she was named after St Therese of Lisieux, who as a child, had been described as stubborn.  Kibbles demonstrated that stubbornness early on so it seemed appropriate.

Since her full name was too long for a small dog, we just called her Kibbles.
She had nicknames:  Kibblers, Kibster, Kibbie Gibbler, Kibblerella, Kibs, Stinker, Fats, Kibbie, Pretty Baby and Pretty Girl — to name a few.  We might also add ‘The’ in front of her many nicknames, as in, ‘The Kibs’.  My Spanish speaking grandparents called her Cable.  Although she had many names, she always knew we were calling her– she was the center of attention, after all.

In the time before social media, Kibbles had her own printed newsletter–  which I mailed to family and friends every month – The Kibbles Anthony Liseux Newsletter.  During an election year, Kibbles even ran for president.  She had Vote for Kibbles stickers to prove it.

Kibbles had friends across the street — and when I’d walk her, a couple neighborhood children would tag along.  One New Year’s Eve we received a knock on the door.  Kibbles’ friends wanted to wish her a Happy New Year.  She was one popular dog.  Our family liked to say she was an Ambassador — uniting people everywhere she went.  It was a role she seemed to enjoy.

Kibbles loved everyone — and enjoyed entertaining guests.  When family would visit she’d want to be the center of attention.  She’d sit on laps and get belly rubs and neck rubs.  But by the end of the day, the added excitement of guests would exhaust her.  She’d voluntarily put herself to bed.  She needed her downtime like many of us do.  But when it was just the three of us at home, she’d behave like a toddler and would be unwilling to go to bed.

As a pup, Kibbles enjoyed many activities, including taking flying leaps from the sofa.  She wasn’t allowed on the sofa but eventually we gave up.  She also enjoyed perching on top of a pillow cushion to nap.  You could always tell that Kibbles had been sitting on the pillow, the pillow had conformed to her shape. 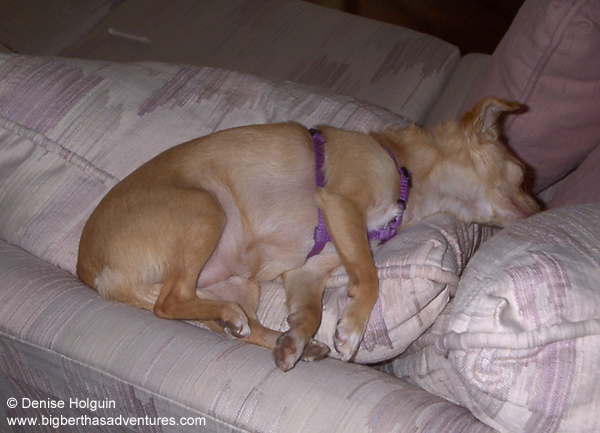 The pillow also gave her the best vantage point in the house.  She could look for movement through the glass on the front door and side window.  She’d alert us of intruders with her ‘fierce’ bark.

Eventually the flying leap exercises were detrimental to Kibbles’ physical health.  Early in her life she developed a problem in her knee.  Her hind leg would get stuck.  My parents paid for the surgery – it was expensive and it was uncomfortable for Kibbles – who had to wear a cone around her neck until her leg healed.  But that investment was worth it – Kibbles recovered and was able to enjoy a good quality of life. 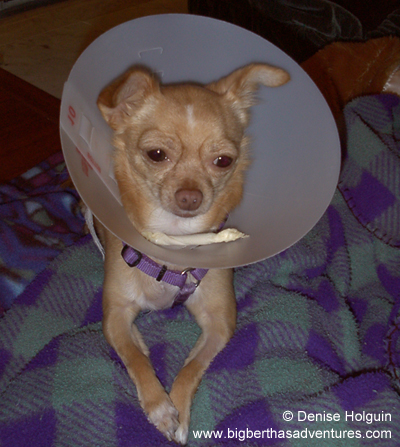 Kibbles was an indoor dog but we would let her go in the backyard.  A couple times she accidentally fell in to the swimming pool – so we learned we had to supervise her outdoor adventures.

She was trained to do her business outside – but she would often forget or get distracted by anything and everything while outside.  Her own shadow could spook her.  Squirrels would taunt her but she’d bark to show them she was in charge.  She enjoyed sunbathing outdoors and even found ways to sunbathe indoors.  The morning sun would shine through the window and she’d strategically position herself in the sun.  She’d move to follow the little patch of sunlight as the day advanced. 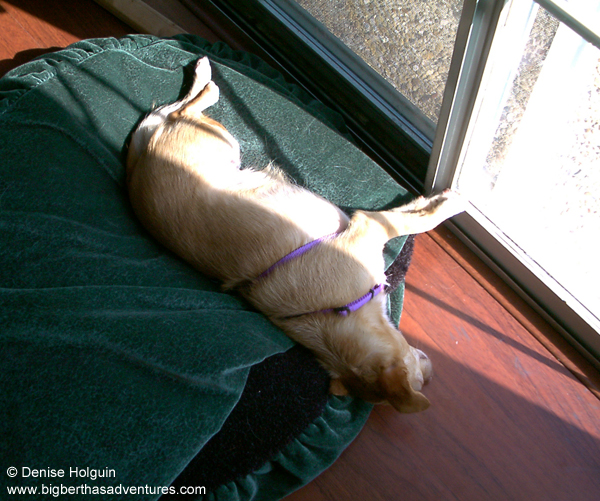 Kibbles grew up before the age of Instagram photos and Facebook photos.  But she was one frequently photographed dog.  I treated her like a supermodel.  She seemed to know how to tilt her head and pose for the camera.  She could model a sock like no other dog – worthy of an ad for The Gap.

Winters were the hardest for Kibbles.  Small dogs get cold easily.  While she was reluctant to wear them at first – we found sweaters to be effective for keeping her warm.  Mom even made fleece ‘sweaters’ for her as well as blankets.  At that time clothing and accessories for pets hadn’t taken off yet.  When mom went to buy fleece at the fabric store someone asked her who the blanket was for.  When she told the person it was for a dog, she got a funny look.  But it didn’t matter.  Kibbles was family.

To keep warm, Kibbles enjoyed napping on laps, napping inside jackets or sitting in front of the fireplace.  It got to the point she knew how to signal she wanted the fireplace on. 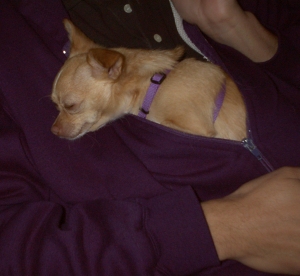 Bath time was not her favorite activity.  As a puppy, she’d get washed on Saturdays in a little plastic basin.  She’d stand there shivering and unhappy.  Afterwards mom would use the hair dryer to dry Kibbles’ fur.  But the minute she was let down she’d run in circles on the carpet – trying to dry herself off. Bath time also meant her bed, blankets and toys would get washed.  She loved it when we removed her fresh-out-of-the-dryer-warm belongings.  She’d nap there after the exhausting bath time experience.

Kibbles loved snacks — including Snausages, Beggin’ Strips and Milk Bones.  She enjoyed hiding her Milk Bones throughout the house.  By hiding, I mean she’d place them in corners or along the wall.  She’d even make movements like she was burying the Milk Bones.  We praised her for doing a good job.  We’d often play with her by reaching for the Milk Bone she had just buried.  She’d get suspicious and would hide the Milk Bone in a new safe place.  She could even recognize the sound of a Milk Bone being disturbed on the wood floor.

Kibbles also enjoyed a variety of chew sticks and chew strips.  She was able to hold the chew sticks with her paws and she’d go at it– chewing away.  The end of the day was marked by her grabbing her favorite chew stick and sitting on a lap with her favorite blanket.

One of the first treats I bought Kibbles was at a fancy dog boutique in Monterey, CA.  It was shaped like a waffle and had some sort of ‘syrup’ on it.  Kibbles loved that treat.  On another trip we found a blanket with a dog head on one corner and the tail on the other.  These days you see these animal blankets everywhere — they are intended for children.  At the time, these blankets were novel– and expensive at a touristy gift shop in Nevada.  I saw the price and couldn’t justify spending the money.  We left the store.  But I couldn’t stop thinking about the blanket.  Kibbles needed it.  So we went back and I bought it for Kibbles.  (The blanket has been featured in several photos already.  It’s the brown dog)

I could go on and on about Kibbles.  We all knew the day would come and even with a good long life of 15 years, the time to say goodbye came too soon.  She had developed health problems – she couldn’t eat her usual food without getting sick, she had severe allergies that prevented her from going outside and she had a cataract in one eye.  There were other ailments that led to her passing but I don’t want to remember them. Kibbles arrived during my transition from college to entering the work force.  She arrived when I had few companions of the two-legged sort.  Fast forward to the present and my life has many two-legged companions.  But dear God, I want Kibbles back.

She will be missed not only by me but my family.

I now understand why obituaries and tributes are not always well written.  Who on this planet is prepared to write something eloquent and meaningful that captures the essence of the deceased – given the emotions happening at that very moment?  (Even if it’s just for a pet) And how is a person to gather all the photos –all the memories and compose them into something worthy?  And even if you do succeed— it signifies closure.  I don’t want to end the story with a single tribute.  But I also want to start the process.  I will pepper in more Kibbles blog posts to keep her memory alive. Thank you for reading.

5 thoughts on “Her name was Kibbles Anthony Lisieux Holguin”