Preface:
I recently visited my favorite store, Discount Model Trains, in Addison, Texas.  I must have spent a half hour trying to determine which miniature figures to purchase. When I spotted the miniature photographers I knew I had to buy them.  I didn’t even look at the price until I got home (thankfully).

I placed my miniature figures in my hands then considered where and how I should photograph them.  After careful thought, my inspiration came from my friend Joe Maleski.  He was telling me about photos he’s taken on his many adventures while on his kayak or in his Jeep… or while on a plane.   He has taken the same photo of a location but from different vantage points.  He’s also the one that has inspired my friend Tore and me to do a series of photos:  I take a picture of Tore while Tore takes a picture of me at the same time.  It requires some coordination and teamwork.  With that said, I present, “Tom the Dragonfly Photographer.”

Tom is an avid nature photographer and adventurer.  He spotted this dragonfly in the wild and boldly approached it to take a photo.  As he got closer, he noticed the wing was slightly damaged. 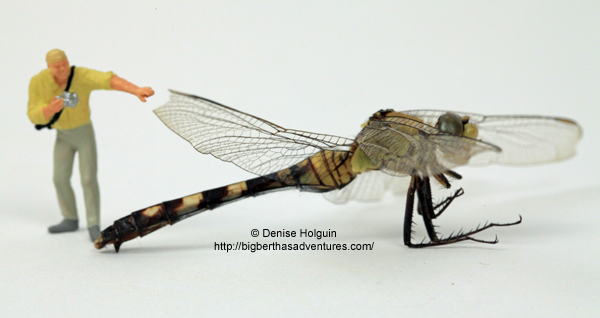 This all seemed pretty easy.  But when I originally wrote the blog, I realized I photographed a close-up of the wrong wing.  Oops!  Here’s the ‘oops’ photo.   Still quite nice.

Tips:
–  Photography can be a fun adventure with friends.
–  Miniatures are great additions to your photography props.
–  Look for inspiration anywhere and everywhere.

Special thanks to my friends who inspire, encourage and motivate me to pursue my interests.